Update on Bulgaria bombing and how to help 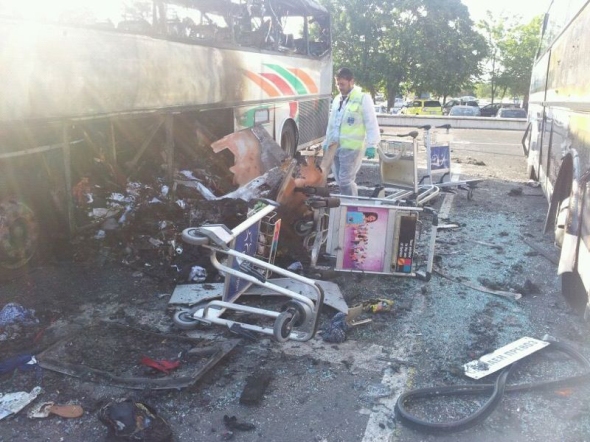 ZAKA volunteers examining the scene of the terror attack on the Israeli tour bus at the Sarafovo Airport in Burgas, Bulgaria on July 18. Photo courtesy of ZAKA.

We were horrified to hear about the barbaric bombing in Bulgaria yesterday that took the lives of innocent people. If you want to help the surviving victims and the families of those killed, the Jewish Agency for Israel’s Fund for the Victims of Terror is accepting donations.

The fund will provide financial assistance to Israelis wounded in the attack in Bulgaria and to the families of those killed.  The assistance, made possible by a contribution from The Jewish Federations of North America (JFNA), is meant to help those affected by the attack address supplemental needs not covered by Israeli government bodies.  Any family that experienced the loss or injury of a loved one in the attack may request assistance from the fund.

One of the survivors shared his account of the tragedy here.

Jewish Agency Chairman of the Executive Natan Sharansky said that the assistance provided by The Jewish Federations of North America demonstrates the solidarity of Jews around the world with the terrible pain of those Israelis wounded in the attack and with the deep mourning of the families of those killed.

The Jewish Agency’s Fund for the Victims of Terror, established in 2002, provides financial assistance to victims of terror in Israel.  Since its establishment, the fund—which is sustained by contributions from Jewish federations, philanthropic foundations, and donors around the world—has enabled The Jewish Agency to provide thousands of terror victims and their families with assistance at a scope of more than NIS 100 million.