The cupcake seen around the world 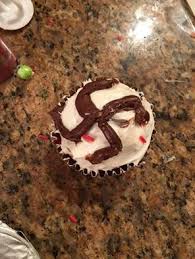 A teen birthday guest drew a swastika on a cupcake at her 14-year-old friend’s birthday party. Photo courtesy of the mom’s Facebook page

On the morning after her 14-year-old  daughter’s birthday sleepover, one Valley woman received a text containing a photo of a cupcake decorated with a swastika.

The photo came from the mother of one her daughter’s guests, who said her daughter felt uncomfortable  the night before when one of the other teens drew the symbol during a cupcake-decorating session. “Imagine my surprise,” said the Valley woman, who has requested that her name not be used. Upon further investigation, she found that two of the girls posted the cupcake photo on Snapchat, along with snarky comments.

“A few of the girls expressed discomfort and offense at the decoration,” the mom told Jewish News via email. “My daughter told the girls she was offended and walked out of the room … Nobody thought it was funny. Another guest decided to smear the cupcake frosting and toss it in the trash. When I came downstairs, I saw several cupcakes decorated with sprinkles and chocolate, but I never saw the swastika one. The girls self-regulated their own party because after the incident, they spent the next few hours doing karaoke, opening presents and just chilling with each other.”

After the party, the birthday girl’s mom posted the cupcake  photo on her Facebook page, with a brief explanation about what happened. By the next day, the cupcake made news around the world.

“I was absolutely surprised by the response to my Facebook post,” said the Valley woman, who works in public relations. “Not at the overwhelming reaction to a swastika on a cupcake – which is just not OK in any situation – but the vitriol at a certain political party. As I stated in my original Facebook post, this was not a political position, but more a statement about the environment we now seem to be living in, where racist, anti-Semitic, and mysoginistic acts or words are being allowed to fly with no huge reaction. Intolerance cannot be normalized regardless of who is in office — the human race will exist long past any one president’s term or terms of office, so let’s not lose our humanity. People still need to be kind and respectful to one another, regardless of color, religion, sex or political position.”

Not only did her Facebook post make international news, but similar to the childhood game of “Telephone,” inaccurate reports were published, such as the story headlined, “Arizona teens bring a cupcake with a swastika in icing to a Jewish girl’s 14th birthday party.”

“This was one cupcake decorated by a 14-year- old,” said the mom. It was thoughtless and insensitive and she thought it was just being funny — but it wasn’t a hate crime nor was she trying to bully my daughter. I dare anyone out there to remember doing stupid things as a teen — we were just fortunate that social media wasn’t around to blow up everything.”

The mom said that her daughters and their friends also learned an invaluable lesson about the power of social media.

“Whereas this story has spread much further than I imagined and even wanted … it also allowed people to quickly see a photo and read a headline and assume a whole lot more than what actually happened. In the end, this was a thoughtless action by a young girl who learned some very important lessons. We all can learn lessons — whether we’re 4 or 14 or 44!”

The parents of the girls who posted the photos “were shocked that this happened and grateful that it had been brought to their attention,” said the mom. “Each parent had a meaningful conversation with their own daughter about the Holocaust, hateful symbolism, intolerance, sensitivity, friendship and standing up for what’s right. My family received heartfelt apologies from the girls who decorated the cupcake, which was enough for me. All the kids learned important lessons stemming from this event.”